As Christmas approaches, and especially this unusual year, you might want to feel a bit closer to the Spanish culture, by enjoying some typical Spanish Christmas sweets and desserts, that you can bake at home or buy online or at a specialised store.

This is not only a very tasty dessert, but it’s also lots of fun to prepare and eat. This ring-shaped cake, also known as King Cake or Three Kings’ Cake, has two secrets in it: a figurine and a bean. Whoever finds the figurine gets crowned as the King, and whoever finds the bean, pays for it.  It owes its name to the Three Kings’ Day (January 6th), the day when it’s usually eaten. 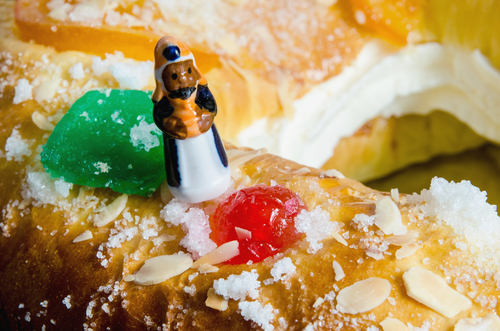 This is an easy and fun pastry to bake at home as a family activit, and we have prepared this recipe for you!

In the last half of the 20th century, filling the Roscón with whipped cream or a thick custard became popular. Today about a third of these pastries made and sold in Spain are filled. If you want to fill yours, use a bread knife to slice the bread in half horizontally and carefully remove the top. Next, squeeze in the whipped cream or filling you’ve chosen and carefully replace the top. Keep refrigerated until serving if filled with cream or custard.

Another Spanish Christmas sweet you can easily find at this time of the year anywhere in Spain or in specialised stores abroad, or otherwise online is the delicious nougat bar called Turrón.

The most typical turron comes from Alicante, Jijona (Xixona). Its main ingredients are peeled roasted almonds and honey. The Turrón can be hard or soft, and many varieties exist such as dark, milk or white chocolate nougat, coconut, or other variations with whiskey or liquor.

Its origins are uncertain, although history has proved that the Arabs were used to putting almonds and honey in their sweets. Barcelona and Alicante have claimed the creation of the Turrón to be their own; wherever the truth may lie, what’s sure is that countless Spanish factories look forward to Christmas (and the previous months, too) to sell this well-known sweet throughout Europe. 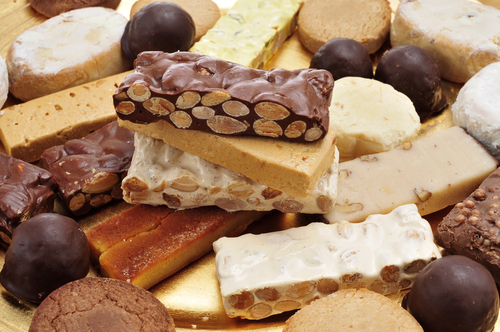 The Mantecado is one of the most typical Christmas sweets from the region of Andalucía, which first appeared in the bakeries of Antequera, as some say, or Estepa (Seville province), as others state. Its curious origins are related to the excess of cereals and piglet lard during the 16th century.

The Mantecado (from “manteca”, which in Spanish means “lard”) are made of wheat flour, lard, sugar and egg white. They are later flavoured with either cinnamon, almond, chocolate or lemon, among others. This square-shaped sweet is also widespread throughout the year, although it’s during Christmas when the selling peaks.

A variety of the Mantecado is the round-shaped Polvorón, which, however, has much more flour, it lacks egg white, and it always has almonds inside, in contrast with the Mantecado. Unsurprisingly, its name comes from the excess of flour, which make it seem like it’s covered in dust (i.e. “polvo” is the Spanish word for powder). The Polvorones are eaten only during Christmas time, they are wrapped up in colourful paper, and they usually crumble apart when opened. 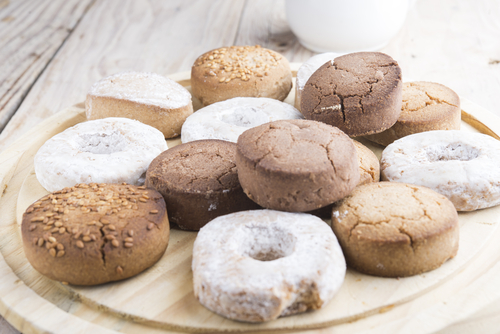