Past performance is no guarantee of future results, especially in these complex times. However, data gives an overview at a special moment, in a given environment, and they may help us build strategies for the future.

In this edition, we would like to share some interesting data on the Spanish housing market, up to the end of 2019, in light of recent figures published by the Spanish notaries regarding foreign buyers in the 2nd semester of 2019 (private properties). We will focus on purchases numbers and purchases prices of the main foreign nationalities over last two years.

As we wrote in the first edition of the IB News, there are various sources of data on the Spanish market. The advantage of the notaries figures is that they reflect the transactions exactly in the period in which they occur, as they are registered in the month of the sale.

One in five transactions in Spain are made by foreign buyers 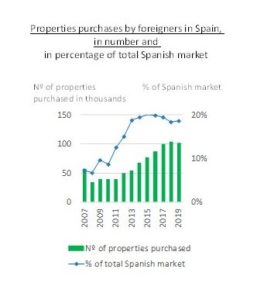 Let’s start with a global overview of the market.

Foreign buyers are very important to the Spanish market as they have represented approximately one in five transactions since 2013, 19% in 2019.

Their importance is especially strong in the Mediterranean coastal areas (the Valencian Community, Andalusia, Catalonia, the Region of Murcia) and in the Islands (Canary and Balearic Islands) as 80% of such acquisitions occur in these regions, whereby 60% of total purchases in Spain also occur in these popular regions. The metropolitan area of the Spanish Capital City, Madrid, is also attracting international buyers, and almost 10% of all foreign buyer purchases in 2019 took place in the Madrid region.

In 2019, more than two thirds of foreign buyers were Europeans, including European Union nationals and the British. Spain is only a 2 to 4 hours flight for most of them …

Despite Brexit, Brits remain number one investors, with 13% of total foreign purchases. Then, are the Moroccans, the French and the Romanians: 8% each, Germans: 7%, Italians: 6%, Belgians: 5%, Chinese and Swedish: 4%, Russian and Dutch: 3%, Norwegians: 2%, etc … These 12 nationalities are the main buyers and account for 72% of foreign buyers.

The properties bought by foreign buyers tend to be in a higher price bracket. In the 2nd semester of 2019, their average price was € 1,801 per sq.m, while the average for national purchases was at € 1,451 per sq.m.

At the other end of the scale, for properties with a value of under € 1,000 per sq.m, we see the Romanians buying at an average of € 973 per sq.m and the Moroccans at € 697 per sq.m. The profile of these 2 nationalities differ from the other ones in our sample, as they generally refer to economic migrants.

2019 was a record year for tourism in Spain, with 84 million international

tourists, 1% more than the previous year. Just behind France, Spain remains the 2nd most visited country in the world. 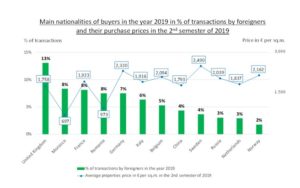 The situation in 2019 was slightly different if we focus on housing purchases, as 2019 registered a decrease of 1%, the first decrease since 2011…  A reason to worry? 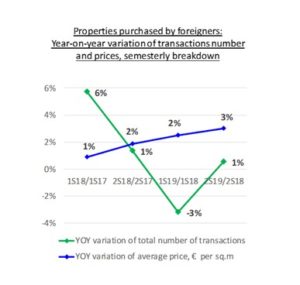 A semesterly breakdown of 2018 and 2019, gives a better perspective.

But then, the second semester of 2019 gives a more positive perspective, as purchases number recovered by 1%.

Moreover, property prices support this change of direction: their pace of growth is accelerating since the first semester of 2018, from 1% to 3%.

A growth comeback…… for all nationalities?

In order to have a homogeneous price group, we will exclude Moroccans and Romanians of our sample.

The overall picture is pretty good: purchase prices have increased for all nationalities over the last 2 years. Looking deeper in semesterly activity, one can see some irregularities.

For most of the nationalities, 7 out of 10, the 2nd semester of 2019 is a semester of rise, ranging from 2% for Germans to 12% for Belgians. Along with this positive movement, transactions trends are improving: 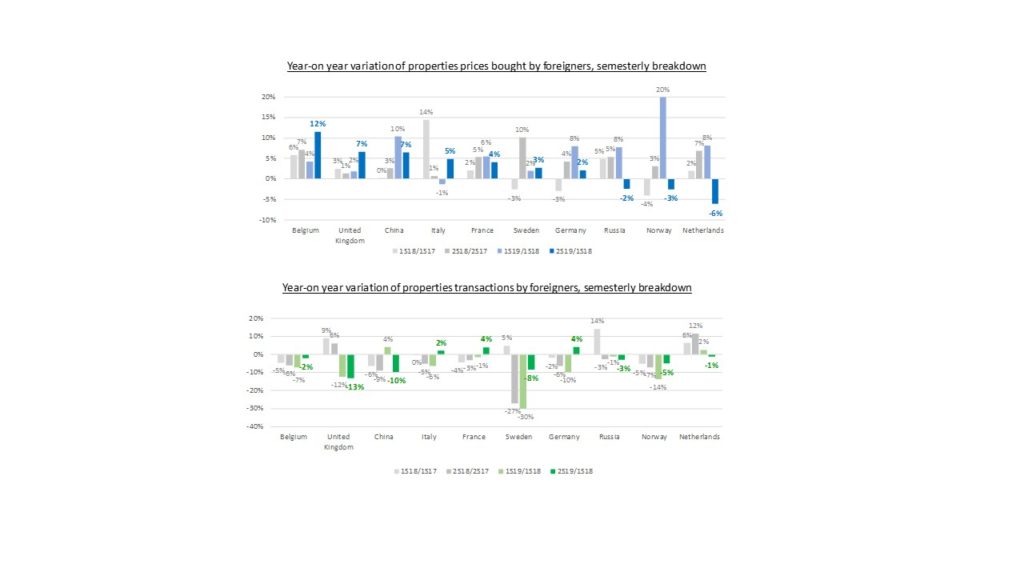 By the end of 2019, foreigners still purchase at prices below their historic high, -18% while comparing the 2nd semester of 2019 to the first semester of 2008.

Of course, each nationality has its own dynamic. Germans and Belgians pay the same prices as they did more than 10 years ago, respectively -2% y and +1% compared with their highest levels, on semesterly values; while Norwegians, Dutch, Chinese, British, French, Italians and Russians  still pay significantly lower prices, ranging from -17% for Norwegians to -28% for Russians.

They all have their local preferences, with a great impact on local prices. The Balearic Islands are the most expensive place for foreigners: € 3,174 per sq.m. in the 2nd semester of 2019. They are also the region that get closest to its highest level, with average prices standing just 6 % below the values seen in the peak, driven by German influence. In the Balearic Islands, Germans represent 38% of foreign buyers in 2019, English buyers being far behind with 14%.

At the opposite end is the Murcia Region. Within the Mediterranean coasts and the islands, it is the cheapest area for foreigners, at an average of € 1,015 per sq.m, a price 53% below its peak. The main nationalities buying here in 2019 were the British, who represented 33% and the Belgians at 7%.

Could months of lockdown reinforce the renewed appeal of foreign buyers for Spain? As the Spanish say : “Quizás, quizás, quizás…” (Perhaps, Perhaps, Perhaps as the English version of the song says!). And perhaps the digital nomad now remotely working will be key in boosting traditional foreign demand.